After abandoning this blog for nearly two years(!), an adventure-filled 2015 (and, with any luck, a similarly exciting 2016 ahead) made me think I should get back to documenting what I get up to in a medium other than the series of postcards I end up mailing back to my apartment in DC.

One of this year’s excursions? A whirlwind 30ish hours in San Francisco, capping off my busiest month at work with a decidedly un-leisurely city break.

Some people thought it insane to fly all the way across the country for such a tiny amount of time, especially since this was my first-ever trip to California (or, for that matter, anything west of Dallas). I certainly didn’t get to see anywhere near everything, true. But I’d definitely recommend giving a quick trip a shot if a weekend is all you can spare. Here’s what I squeezed in.

1:40 p.m. – Landed at SFO. Tweeted a photo of a sign in the terminal advertising the new yoga room (v. #onbrand, San Francisco). Headed for the BART station and tried to figure out how the public transport situation works.

3:00 p.m. – Arrived downtown. Walked from the Embarcadero BART station through a market and into the Ferry Building. Browsed around, grabbed an iced coffee from Blue Bottle, snapped some Instagram material of the Bay Bridge.

3:30 p.m. – Having walked a ways along the Embarcadero, noticed the ticket booth for Alcatraz cruises at Pier 33. I’d been told by multiple people that Alcatraz was a must-see attraction, but naively assumed I could just buy tickets on the day I arrived. Wrong—the ticket booth said they were sold out until Sunday, when I’d be on a plane back to DC.

3:32 p.m. – Refused to take no for an answer and checked to see if I could buy a ticket online. By some miracle, there was precisely one ticket left for the very last tour of the day. But if you go, don’t count on having that kind of luck—if you’re sure you want to see Alcatraz, reserve your ticket before you show up in SF.

4:00 p.m. – Wandered around the incredibly tourist-y Pier 39. Spent a solid 20 minutes gawking at the sea lions—very smelly, very entertaining. Temporarily reverted to pescetarianism to try some clam chowder in a bread bowl, which my dad has raved about for at least the last 20 years, at Pier Market. It was probably worth it.

6:20 p.m. – Returned to Pier 33 to get on a boat to Alcatraz. Being the night tour, we were treated to views of the sun setting behind the Golden Gate Bridge and the city skyline at twilight.

6:50 p.m. – Arrived at Alcatraz Island, which is delightfully creepy at night (especially on the night before Halloween). In addition to following the excellent audio tour (which is narrated by former guards and prisoners), I got to poke around the infirmary and hear a talk on sex, love, and murder at the prison, which was fascinating and just mildly terrifying.

10:15 p.m. – Completely beat after a long day of flying and walking, checked into my hostel, the Hostelling International location at Fisherman’s Wharf—it’s actually in a building on the grounds of Fort Mason. It was a great value—well-located, super comfortable (at least in the mild days of late October), and with a respectable free breakfast the next morning.

8:00 a.m. – Had coffee and a bagel at Cafe Franco in the hostel, then checked out and walked out the back door to take in incredible views of the Golden Gate Bridge and Alcatraz Island. Maybe it was just the early hour, but the area was deserted aside from the occasional passing runner. Highly recommend Fort Mason as a quiet corner of the city where you can enjoy the scenery without a crush of selfie sticks.

9:30 a.m. – Walked down from Fort Mason to Ghirardelli Square to browse some shops and grab an obligatory milkshake from the chocolate marketplace for breakfast #2.

11:45 a.m. – Boarded a cable car, because of course. It’s $7 and it’s an unforgettable way to view the city and it’s in the 1000 Places to See Before You Die book that I’ve inexplicably elevated to holy status. Don’t worry if you can’t stand outside, you can still get a great view if you’re sitting in the car.

12:15 p.m. – Got off the cable car at Powell Street to walk around Union Square and its environs, then headed to Mazarine Coffee for avocado toast and, of course, some coffee for lunch. And to charge my phone, which was perilously close to denying any future gram opportunities. 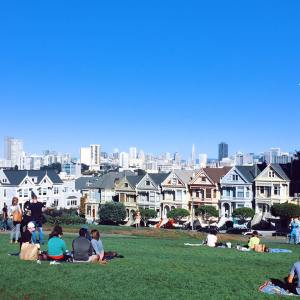 2:00 p.m. – Found the correct change to board a bus headed toward Alamo Square, which was incredibly quiet (though unbelievably windy) until I got over to the corner of the park overlooking the Painted Ladies (also the corner from the opening credits to certain seasons of Full House). But even that wasn’t unbearably crowded, and the view of those gorgeous Victorian houses with the city’s skyscrapers in the background was worth the struggle to find actual cash for the bus.

3:30 p.m. – In desperate need of both a restroom and an outlet to charge my phone (again) (ugh) (Apple, why?), I wandered into the first relatively empty coffee place I could find, Vinyl, where I had a so-so cookie but a fantastic mocha.

4:30 p.m. – Walked up into Haight-Ashbury, which was basically exactly what I expected in that someone offered me shrooms while I was walking down the street.

4:45 p.m. – Grabbed an Uber to the Golden Gate Bridge, which I’d thought I might skip, but really, can you skip that on your first trip to San Francisco? I couldn’t. Although it turned out I could skip walking across the whole thing, because I tried and scared myself shitless by managing to convince myself that it was physically possible to just fall over the edge by accident. But turning back a quarter of the way across meant that I got back to solid ground in time to watch the sun set over the bay, which was a good reward for some irrational fear.

6:30 p.m. – Boarded a bus to the Daly City BART Station. Debated whether to head back downtown for a couple more hours of exploration or call it and go to the airport. By the time I arrived at Daly City, it was almost 10:30 p.m. Eastern time and I was dead tired, so I admitted defeat.

Despite a whole lot of wasted time in my itinerary, I managed to squeeze a decent amount out of my 30-odd hours in San Francisco. Some of my favorite travel experiences just come from walking around absorbing a place, or sipping coffee at places locals rate highly on Foursquare, or ~thinking deep thoughts~ at scenic overlooks, so even the inefficient bits of my itinerary worked for me.

Some people still think I was insane to fly across the country and spend a day and a half in a city where there’s such an overwhelming amount to see and do, but the chance to cross a few items off my travel bucket list without using a single vacation hour was a pretty great deal.

One thought on “30 Hours in San Francisco”