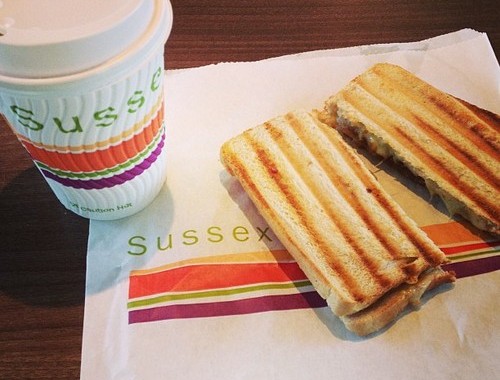 One of the few things I really knew about British cuisine prior to my arrival here is that Marmite is a source of controversy – people seem to either love it or absolutely hate it. So I knew I had to try it for myself at some point when I was here to see which camp I’d fall into.

Today, almost exactly one month after my arrival, I finally picked up a cheddar and Marmite panini for lunch at a café on campus.

As an American who hadn’t grown up with the stuff and developed some sort of attachment to it, I kind of suspected this culinary adventure would turn out to be a waste of a couple quid and a tragic misuse of cheddar cheese. But much to my surprise… I really, really liked it. Maybe that’s just because I was starving, having forgotten my wallet this morning and not eaten breakfast. Maybe I just like cheddar cheese so much that nothing can ruin it. Or maybe I’m just addicted to sodium. Who knows. It’ll probably take a few more Marmite test runs before I have a conclusive answer.

For now, though, I’m pretty sure that I fall into the pro-Marmite camp.

Have you tried Marmite? What are your thoughts?